Teen sends a ‘sext’ – and pays a terrible price

A 2012 study found that sexting has become a mainstream practice among some youths. The survey of nearly 1,000 public high school students of diverse backgrounds in Texas found that 28 percent acknowledged sending a naked picture of themselves through text or email, and 31 percent asked someone for a “sext.”

Adolescents who engaged in sexting behaviors, the researchers noted, were more likely to have begun dating and to have had sex than those who did not sext. For girls, sexting was also associated with risky sexual behaviors. “What is God’s vision for my life?”

Sixty seconds in one minute. Sixty minutes in one hour. Twenty-four hours in one day. 365 days in one year. One life to live. Have you ever thought about what your vision is for your life? Most of us would think about careers, starting family, what kind of car we’d want to drive, etc. But have you thought beyond the stuff and asked what my purpose is in life? When you do, the next question is always the hardest – how am I going to get there? Better yet, what’s the vision?

It’s easy to get caught up in what’s happening right now that we lose sight of the future. Or we never even consider where we’re going in life. Have you ever felt stuck in life with no direction or purpose? This show is for you!

I have made many mistakes along the way. Every one of us makes choices that we find leave us hurt and lost. Tonight, on HopeNet Radio, Jeff and DW sit down with Jake Spielbauer of Ignite Youth Ministries to talk about discovering God’s vision for your life.

Bullying and Consequences: A true story

October is Bullying Awareness Month. Middle school years are often harder for young people than high school. If you have a pre-teen at home or have worked with junior high kids, you know they can be downright cruel. Here’s a tragic story out of Florida that is developing over the past few weeks that will be interesting to follow.

WINTER HAVEN, Fla. — After 12-year-old Rebecca Sedwick committed suicide last month, one of her tormenters continued to make comments about her online, even bragging about the bullying, a sheriff said Tuesday.

The especially callous remark hastened the arrest of a 14-year-old girl and a 12-year-old girl who were primarily responsible for bullying Rebecca, Polk County Sheriff Grady Judd said. They were charged with stalking and released to their parents.

Read more here and here. [Update: Charges have been dropped against the 2 girls accused of bullying.]

Sadly, this isn’t the first time and probably won’t be the last time something like this happens. Bullying happens every single day and takes a few different forms today. It’s not limited to a certain age group, sex, nationality, religion, or sexual preference. Technology has given new platforms for bullying to spread and the scars often go deeper than physical abuse. Why? Because words are powerful. And these words are often ones you’d never say face to face. While the story includes verbal face-to-face abuse between these 2 girls and Rebecca, she also had received messages on her mobile device that probably compounded things.

Bullying is actually a symptom of deeper issues within a person. Usually bullies suffer from low self-esteem or self-worth, and have been victims of bullying at home or by someone they know. Hurting people hurt people. And as we’ve seen in this story, taking part in evil acts is contagious. We will all stand accountable before God for the words and behaviors we say and do. Each one of us needs to take a step back and look at the words we use and how we treat the people around us.

Check out these 11 staggering facts about bullying in America. 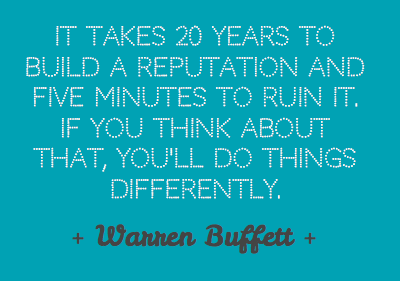 5 Ways to Keep a Good Reputation Reputation (n.) – the beliefs or opinions that are generally held about someone or something. A widespread belief that someone or something has a particular habit or characteristic. Synonyms: name, good name, character, repute, standing, stature, status, position, renown, esteem, prestige.

It may be the most important thing you have. Your reputation. What do people know you for? What qualities define you or your personality? I’m not saying you need to be overly concerned about what others think of you. People’s opinions of you change daily. What’s more important is how pleased God is with your character. Are you living like you say you are? Are you concerned about the things that matter to God? If so, great! If not, ask yourself why.

Choose a good reputation over great riches; being held in high esteem is better than silver or gold.

1. Respect yourself and others.

Treat others with the same respect and dignity the way you want to be treated. Even if they don’t return the respect, you can always take the high road. Choosing to respect someone who you feel doesn’t deserve your respect will speak volumes about your character to your peers and those around you. It’s also really important that you respect yourself. Take responsibility for your body, mind and soul. Don’t allow someone or something to rule any one of those areas other than God. You are precious to God.

2. Think of yourself less than you think of others.

This isn’t the same as thinking that you’re less than someone else. What this means is to take your eyes off of you once in a while to notice someone’s needs and dreams. This is true humility. Any person who can help someone else find their God-given purpose and value is a person to be treasured.

This seems rather obvious, but more often than not, we find ourselves in discord with friends over something we said to them or about them. The Bible speaks extensively on this topic.

I need to repeat that. Don’t trust your feelings. Our feelings are a good barometer that we’re alive, but they’re not trustworthy. Why? I’m glad you asked. Have you ever gone grocery shopping on an empty stomach? Or perhaps you’ve had a bad day at school and you took out your discontent on your brother or sister, or worse yet, your dog? Yeah? Feelings or emotions are often self-serving because people are ultimately selfish. Here’s how we can live for God, not our feelings.

The value of an outside perspective who can lend experience and true wisdom is priceless. This is why I believe students need to be involved in a youth group. Finding a mentor can be hard. Finding a mentor who knows what the Bible says can be even tougher. Not every person should seek to be a mentor, but every person should have a mentor. This is yet another reason we believe in the Online Crisis Chatline partnership with Groundwire. In fact, if you are over 18 and are interested in mentoring, consider becoming an Online Spiritual Coach. You can find information here.

As Ben Franklin once said, “Honesty is the best policy.” Be honest and truthful, even when it may hurt your reputation. Your honesty will mean more than any number of lies you could amount to cover a wrong. Think about it.

What other ways can you think of?

HopeNet Radio with Jeff Strommen & Dave Wager makes its debut this Sunday on Q90 FM in Wisconsin! This week is all about introductions. Have you ever met someone for the first time and made a horrible first impression completely by accident? I guess, you could make a fool of yourself on purpose, but who does that?! In studio with us are two students from Nicolet Bible Institute, Kyle and Todd. They’ll be chiming in, too.

UPDATE: We’ve got the first show up to listen online!

This was a great show. Would you share your story with us? We’re asking 2 questions:

What’s your biggest success(es) in life?